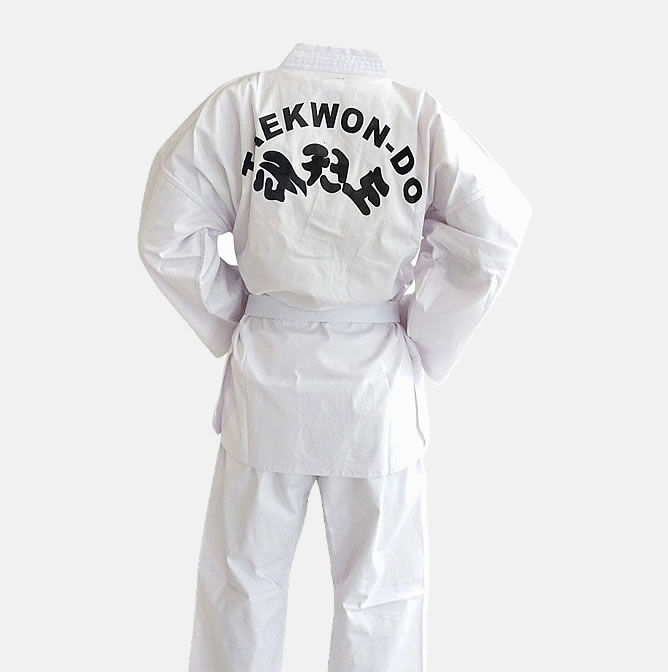 The formal dress/uniform/suit that a Taekwondo martial artist wears is known as a “Dobok”, where “Do” stands for “way” and “bok” stands for “clothing”; therefore, it may be roughly translated as “clothing for/of the way”.

A dobok is made in a variety of materials from cotton to different blends of cotton and polyester. A dobok is closely related to the Japanese martial arts uniform known as “keikogi or dōgi”, which is normally used in Karate and Judo. The similarity is that both have a cross-over jacket front and both use a belt that is called as “tti”. The differences are that a keikogi or dōgi has shorter length pants and narrower sleeves, while a dobok has longer length pants and wider sleeves.

The belt comes in different colours that signify the skill accomplished by the wearer, with the highest colour being black. Advanced black belt practitioners are awarded a Dan according to the skill achieved. In Taekwondo, the highest Dan is 9 and the person wearing a 9th Dan Black Belt is known as a Grandmaster.

Nowadays, a dobok is designed after the Korean “Hanbok”, as seen in the dobok having v-neck jackets.

A newer design is also being experimented by some ITF schools, where instead of a cross-over closing front, a jacket having a vertical closing front is used.

Traditionally, a dobok is in white colour; however nowadays, even black, blue, and red doboks are becoming common.

Sometimes, different colours for the jacket and the pants and also used in different combinations. Experimentation with dobok styles continues, where both males and females wear form-fitting tops with skin-tight leggings, and T-shirts combined with pants or shorts.