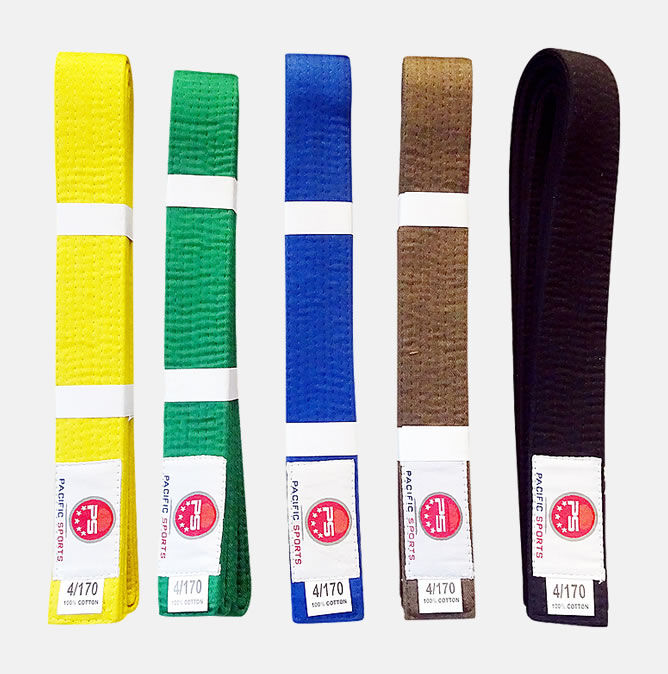 Martial arts like Taekwondo, Karate, Judo, and Jiu-Jitsu have a tradition of wearing belts. A belt is an important piece of clothing in martial arts. Worn correctly, it protects the umbilicus at the front and the back bone at the back, which are two vital pressure points in the body. Martial arts that do not have a belt in their uniforms, wear a sash, which besides protection of the vital points, can also serve to hold swords, knives, sticks, or smaller weapons.

The system of wearing belts originated in Japan. Initially, Japanese martial arts practitioners used to wear a black or white ‘obi’, which was more like a sash rather than a belt. Thereafter, Ko-ryū (ko=old, ryū=school; roughly translated as ‘old school’ or ‘traditional school’) instructors started to provide rank certificates to their students [1].

During 1880s, Jigorō Kanō – educator and the founder of Kodokan Judo, devised a uniform from the ‘kimono’ and other Japanese garments, and termed the uniform as a ‘judogi’. A judogi has three parts, namely ‘uwagi’- a very heavy jacket, ‘shitabaki or zubon’ – lighter canvas pants, and an ‘obi’ – a cotton belt. Subsequently, Karate also adopted this uniform with some alterations and called it as a ‘karategi’ or a ‘dogi’.

Being influenced by the ‘kimono’ – the national garment of Japan, the jacket features two sides, right and left, which are wrapped over each other. If a practitioner is alive, then the left side of the jacket is crossed over the right side; whereas, if the practitioner is dead, then the corpse’s jacket is wrapped with the right side crossed over the left side. Traditionally, this is followed in Japan while wearing a kimono, judogi, karategi, aikidogi, or a keikogi.

As time passed, the length of the pants and sleeves became longer and the material from only cotton changed to blends of cotton and polyester. The traditional unbleached cotton is nowadays bleached white, blue, black, or red. To provide more durability, the stitching is heavier and double layered knee patches are also stitched. Nonetheless, the uniform is still very similar to what was originally devised by Jigorō Kanō [2].

The tying of the belts also have some variations. The following videos show some of the variations in tying a belt.

Howcast video “How to Tie a Taekwondo Belt | Taekwondo Training”:

Judo video “How to tie your judo belt – learn from an Olympic champion”:

Gracie Jiu-jitsu Academy video “Rener Gracie on How to Tie the Belt”:

Paul Shin video “How to Tie a Kaku Obi for Iaido”:

Pacific Sports offers high-quality premium cotton black belts, which are 5cm wide and has 11 rows of stitching. The belts are available in various sizes. These belts are ideal for Taekwondo, Karate, Judo, or Jiu-Jitsu.

Pacific Sports also offers coloured belts in white, yellow, green, blue, brown, and black colours and in various sizes. Other colours and striped belts are also available. It has eight lines of stitching and comes with sewn ends. These belts are ideal for Taekwondo, Karate, Judo, or Jiu-Jitsu.