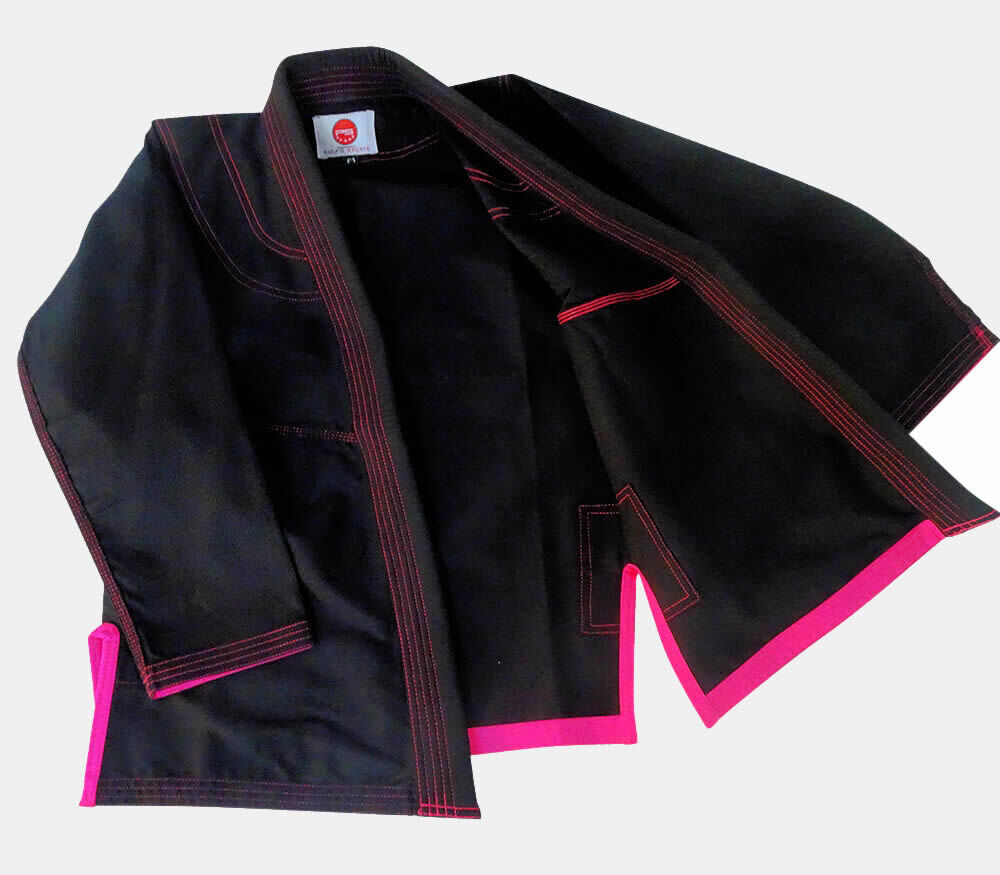 Taekwondo, Karate, and Jiu-Jitsu uniforms, consist of a jacket, pants, and a belt. Normally, a uniform is sold as a two-piece consisting of a jacket and pants, while the belt is purchased separately.

Nowadays, both these organisations have made separate modifications to the dobok.

Another design features a V-neck collar jacket, which is cut in the center and at the sides.

The jacket may have the ITF logo at the centre front V.

It may also have “Taekwon-Do” written in English and Korean languages at the back.

The WTF dobok is being experimented with various designs and changing styles. One design features a V-neck collar jacket, which is cut in the center and the sides.

Another design has a V-neck black collar to distinguish black belt holders. Many more designs are being experimented which includes T-shirts, slacks, and tights. The designs are made in various styles, colours, weights and fabrics.

Taekwondo uniforms may also be paired with special Taekwondo shoes.

The Karate uniform is known as a “Karategi/ Dogi”, or commonly as a “Gi”. It has not seen many modifications and is still almost the same with the jacket having two overlapped sides and loose-fitting pants. However, instead of a jacket, pull-over tops are also available. Modifications are largely seen in different fabrics, colours and weights. The fabrics include canvas and a blend of cotton/polyester, the colours usually are white or black, and the weights of the fabrics range from 8oz to 18 oz.

The Jiu-Jitsu uniform and the Brazilian Jiu-Jitsu (BJJ) uniform, is commonly known as a “Gi”. Originally inspired from the Judogi, the BJJ gi has undergone some modifications. The jacket of the BJJ gi is more fitting and wears tighter to the body. It also has narrower and shorter sleeves along with a shorter skirt. Grip points have reinforced stitching like on the shoulders, chest and sleeves. Pants come with elasticated waist bands and may have either an internal drawstring or a looped external drawstring. Pants also have reinforced stitching at the knees. The gi comes in various fabrics and fabric weights, along with different colours. Jackets are usually in a pearl weave, while pants are in a ripstop weave.

A blue gi is popular.

While training, the proper uniform should be worn as it provides numerous benefits. A gi can come in many different weaves, and the most suitable should be worn. For personal hygiene, the gi should be washed after every training session. Therefore, two sets should be kept, so that while one is being washed, the other is ready for training.

It is recommended to ask the instructor regarding which type of gi should be worn at the martial arts school. Along with a gi, personal protective equipment should also be worn to make the training safe.